You can find all previous articles about Seinäjoen Jalkapallokerho (Seinäjoki FC, SJK) here

The season gets underway

The league season is now near the 33% stage, so it’s a good time to have a look at how things have played out so far.

For SJK it has been an effective, if unspectacular start to the campaign. Defensively they have been very solid, conceding only 4 goals in 11 league games, and they have lost only 2 matches so far. Following an impressive season in 2014, and the fact that 3 of the 12 teams are new to the Veikkausliiga in 2015, it has been noticeable that many opponents have tried to frustrate SJK by sitting back and playing a defensive game. This is assisted by a narrower-than-average pitch at Seinäjoki’s Keskuskenttä ground. Only RoPS from Rovaniemi, though, turned this into a dark art; their anti-football tactic of fouling and over-acting any physical challenge spoiled the season opener in Seinäjoki.

This has led to many scrappy first-halves, which have required SJK to play with patience before finally breaking down their opponents. They have scored many of their 16 goals in the second half, including 3 against Ilves, 2 against HIFK and 4 against KuPS. These three were all in the past two weeks. Away games have proven trickier for SJK with two draws, one defeat and a solitary win in the four games on the road, so far.

Another factor must be the incredible schedule in recent weeks. This has seen SJK play seven league games in the past three weeks. In May, SJK’s routine reads like this; Sunday – Friday – Monday – Thursday – Sunday – Wednesday – Sunday. This includes five home  games, which is a strain on supporters’ budgets, as well as a physical strain on the players. This is made even more bizarre by the fact that there is not a single game scheduled for SJK on Saturday in 2015, the traditional match day in Finland, neither home nor away!

This probably works for the gambling business of  Veikkaus, but doesn’t do the players any good, and isn’t helping the attendances at Keskuskenttä, which average at 2,066 in 2015 down on the 2014 average of 2,297. 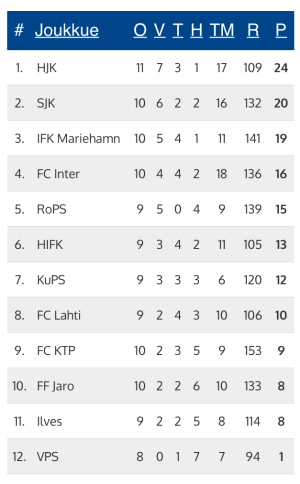 With the signing of new players in the close season, there seemed to be direct competition for Richie Dorman. He’s been at the club for four years and is a vital component of the spirit and heart of the team. It has been a pleasant surprise, therefore, to see that manager Simo Valakari has found a new position for Richie in centre midfield. Whether that is a free, roaming role is not clear, but that’s how Richie has been playing! He’s been winning tackles, playing incisive passes to create goals and, against Ilves, went on a mazy run from the halfway line before firing past the goalkeeper. A goal that will live long in the memory of those that saw it, in a game in which he also hit the crossbar from inside the centre circle!

It has also been pleasing to see the regular appearance of Toni Lehtinen in the starting line-up. Having made his SJK debut in 2012, and helping the club to climb into the Veikkauliiga, he is heading towards ‘veteran’ status. Toni has now scored 68 Veikkauliiga goals, making him the 14th top scorer overall in Veikkausliiga history. He is also SJK’s joint top goalscorer with 33 goals, alongside Mikael Muurimaki. Seeing that Mikki has retired and is playing for Apollo FC, it looks like Toni will soon overtake him too.

No real news yet, but the countdown to the draw is now on and SJK will learn their opponents on 22nd June, when the draw will be made  for the first two rounds. SJK’s first round fixtures will be on 2nd and 9th July and there is potential for a couple of large teams e.g. West Ham United or Everton. Of course, it will probably end up being somewhere Eastern and unpronounceable 🙂 I will look to get the next SJK Update published after that draw has been made, but before the two games take place.

Many thanks to Lari Paski, Supporters Liaison Officer at SJK for his help on this article, and his contribution to my podcast episode on the history of SJK. Many thanks also to Antti Huhtamäki and SJK for the use of the photos.