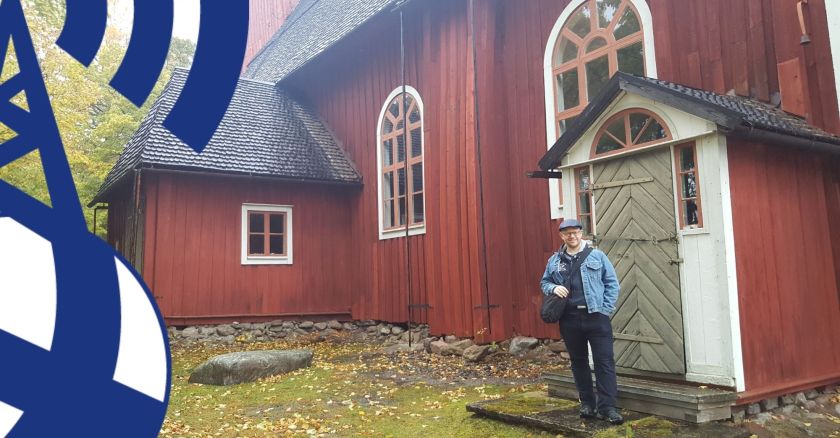 Date: 17.10.2017 Satu and I, with Boris the Dog, embarked on our third road-trip through Pohjanmaa. Below is a photo blog of our road trip.

“Medieval Närpes Church, 1km south of Närpes’ town centre, is surrounded by over 150 kyrkstallar (church stables), built in the 15th century for parishioners who rode in from rural farms to worship. Its altar dates from 1803 and was painted by the Swedish court painter Pehr Hörberg; the crucifix that lies upon it is from the 1400s.” Lonely Planet

“Kaskinen (Swedish: Kaskö) is a town and municipality of Finland. It is located in the province of Western Finland and is part of the Ostrobothnia region. The population of Kaskinen is 1,276 and the municipality covers an area of 10.49 km2 (4.05 sq mi)… The population is bilingual with a majority speaking Finnish (68%) and the minority Swedish (28%). Kaskinen is the smallest municipality in Finland with a town status.” Kaskinen, Wikipedia

Count Per Brahe founded the City of Kristinestad on Koppö Island in 1649. Queen Christina, who was at the time the monarch of the then Swedish Finland, signed the city charter. The Lilliputian new port grew slowly at a pace of one or two people a year. A big push for growth took place in 1792 when the city was given staple rights and both trade and shipping began to grow rapidly… Ship building, seafaring, leather factories, breweries, fishing and various workshops raised the city to its bloom… In the 19th century, the merchant fleet of Kristinestad was one of the largest in the country and the port was one of the busiest in the Gulf of Bothnia… The population of the city is now 7179 (31.10.2010) and the economic structure has changed. 56,3% of the population speak Swedish as their mother tongue while 42,1% are Finnish-speaking. The city centre has changed its expression over the years but it still reflects the centuries of tradition in a unique way. It can be felt when walking down the narrow streets of the grid plan between the well-preserved wooden houses that were spared from the flames. Visit Kristinestad

Next road trip: A trip round Lappajärvi (subscribe to the Explore Finland blog to ensure you don’t miss it!)